During your visit in Greece we welcome you to experience this significant aerial flight, to admire alongside with others, the home of ancient oracle ‘The naval of earth’.

According to the myth, Zeus left two eagles, one to the east and one to the West, and they met at Delphi. It was dedicated to the god Apollo. Pythia was the median, who gave oracles. She was the way that mortals had to communicate with Gods.

Delphi was the cultural and religious center of Ancient Greece.People from all over the world were traveling to Delphi, this sacred place, based in the foot of Parnassus, to seek advice.

You will admire from a panoramic view the famous sanctuary of Athena Pronaia and the temple of Apollo.

Due to the many archaeological monuments that found in Delphi, and you will have the chance to see from a bird’s eye view, the area has been added to the World Heritage of UNESCO.

In this aerial flight you will also fly above the great mechanical project, built at the early 1900, the Corinthian canal which separates the Peloponnese from the Greek mainland.

Your helicopter will take off from El. Venizelos or Faliro Marina next to the stadium of Peace and Friendship.

In this 1:40 hour aerial flight you will enjoy the following Route: 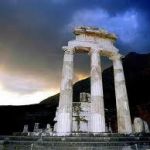 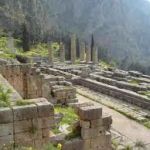 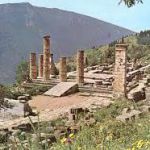 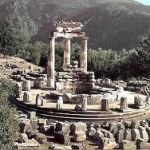 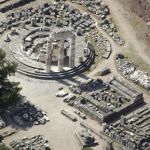 We received your request and we will reply to you as soon as possible.